The Four Marys was named after the four ladies in waiting to Mary, Queen of Scots, who was born over the road in Linlithgow Palace.

They were Mary Seton, Mary Beaton, Mary Fleming and Mary Livingston. Queen Mary spent time at the French court, where she married the King’s son, and returned to Scotland where she was accused of her second husband’s murder and eventually executed by her cousin, Queen Elizabeth of England. 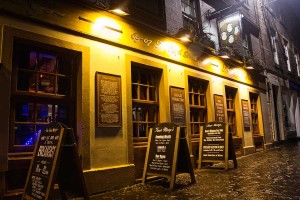 This welcoming and family-friendly pub has a tremendous historical atmosphere with masses of mementoes of this ill-fated Queen, including pictures, written records and a piece of a bed curtain which was said to belong to her.

The pub today is famous for its Real Ales with eight hand pumps, four of which are regular beers with four guest beers which change continually. The pub also organises a cask ale festival twice a year, in May and October. The Four Marys serves fantastic home cooked food daily and has a reputation locally of being the best on offer! You can tell by the many first-prize and runner-up certificates lining the ancient walls of The Four Marys that this is a pub many people hold dear. Proud of its no-television policy, it’s a pub that believes in the old-fashioned values of good conversation, good company and good service.