The Ancrum Cross Keys has been around a long time, nearly 200 years according to the deeds of the property.

And when you think about it, that works out at over 10,000 Saturday nights down the pub. However, it has not always met with approval. We particularly salute the various local ministers who wrote about the ale houses of Ancrum in their 1841 Statistical Account of Roxburghshire, complaining that the “influence on the morals and circumstances of those in their immediate neighbourhood, who are in the habit of frequenting them, is very injurious.” 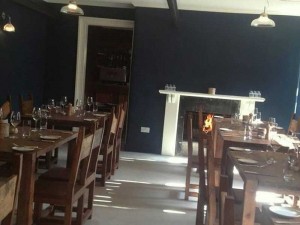 Another passing writer was much more blunt: “I took up my lodgings that night in a small miserable inn in the village of Ancrum, of which people seemed alike poor and ignorant.” All the more amazing then that the Cross Keys now boasts a Gordon Ramsay trained Michelin star winning chef and doubles up as the brewery tap for The Scottish Borders Brewery, Scotland’s only plough-to-pint microbrewery. If ever there was an example a rural pub that has changed with the times, the Ancrum Cross Keys is it.

Sit and listen, with a drink in hand, to the gurgle of the water going by, and you will be transported to a languorous world where time stands still and troubles drift away.

Every garden should have a secret, and this is most definitely ours. So, if you’re looking for something a little off the beaten track, a little off kilter, and just a little bit extraordinary, come and see us… you’ll always be welcome.