Greyfriars Bobby’s Bar occupies the ground floor of a row of Georgian houses adjoining the historic Candlemakers’ Hall. The name of the bar is inspired by an Edinburgh legend of a Skye Terrier called Bobby.

His owner was John Gray, who worked for the Edinburgh City Police as a Night Watchman. When John Gray died in 1858, legend has it that Bobby faithfully watched over his grave every night and from then on his licence and collar was paid for by the Lord Provost , Sir William Chambers. 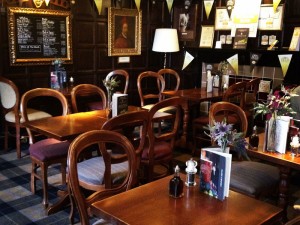 When the little dog died in 1872 he was buried alongside his master in the Greyfriars Kirkyard. Queen Victoria visited their graves and outside the bar you will find a fountain and bronze statue of Bobby erected in 1873.

Greyfriars Bobby’s Bar is in Candlemaker Row within a short stroll of Chambers Street, Grassmarket and George IV Bridge – however you won’t find another like it. Step in to discover a traditional pub of unique character, revered for its eclectic range of real ales and its quality pub food, which are served, as they should be, with a generous measure of famous Scottish hospitality.