In the sixties the Forrest Hill Bar, as Sandy Bell’s was then known, was a melting pot of writers, poets, artists, singers and musicians.

It evolved into a folk/blues music venue where musicians and singers were encouraged to perform and it became known worldwide for its major part in the folk revival. 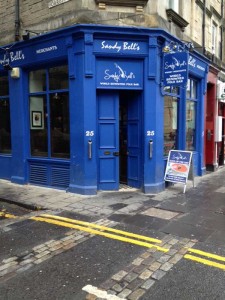 Hamish Henderson and Ian Green of Greentrax records encouraged and nurtured the folk scene and Ian conceived the Sandy Bell’s Broadsheet, a fortnightly magazine for Scotland’s traditional music scene. Budding musicians such as Ally Bain, Barbara Dickson and Dick Gaughan cut their teeth in the Bells as did Billy Connolly, The Dubliners and many many more.

This little pub with its well-stocked bar, including 75 different malt whiskies, attracts a global clientele including recently Emmy Lou Harris and Eric Idle, as well as film crews who come to record the musicians. Scottish soups, haggis toasties and continental coffees are some of the selection of food served by our friendly staff and landlord for the hungry visitor. Musicians are welcome to join in most music sessions which are nightly from 9pm with a slow session every Monday at 6pm followed by the Scottish Mouth Organ group every second week. There is also an afternoon music session on Saturdays and Sundays. Today the pub is an important point of pilgrimage for anyone with any interest in folk music and you never know who you’ll rub shoulders with in Sandy Bell’s.