The Abbotsford is Edinburgh’s best preserved elaborately designed and ornamented bar to have survived from the ‘Golden Age’ of Scottish pub design.

The Abbotsford was named after Scottish historical novelist Sir Walter Scott’s baronial mansion near Melrose. Originally the Abbotsford Arms (1887) stood on the site. 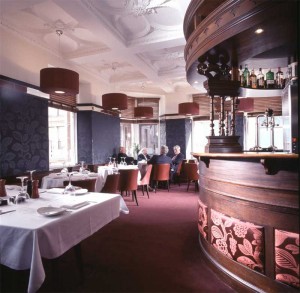 In 1902 the original bar was demolished and Jenner’s & Co who were making additions to their department store, commissioned famed pub and brewery architect P.L. Henderson to design the new Abbotsford Bar. This outstanding example of Edwardian pub design features a classic island bar carved from Spanish mahogany and an elegant Jacobean ceiling. Pubs like this were built during the height of the Temperance Movement and their opulent character was in marked contrast to the dark and dingy bars of Edinburgh past where the ceilings were often not beyond the reach of a man’s arm.

‘In the 1950s and 60s the bar became a favourite haunt of the ‘Rose Street Poets’ who included Hugh Macdiarmid, Sorley McLean and Sydney Goodsir Smith’

In the early part of the last century the Abbotsford was well known by Music Hall Artistes who performed at the Empire, Lyceum and Royal theatres. In the 1950s and 60s the bar became a favourite haunt of the ‘Rose Street Poets’ who included Hugh Macdiarmid, Sorley McLean and Sydney Goodsir Smith. In more recent times the pub has played host to comedians Billy Connolly and Robbie Coltrane and is a favourite of political figures such as Alistair Darling and Gordon Brown. In the spring of 2007 restoration and refurbishment began in the Abbotsford’s fabulous island bar and stylish new restaurant above. This restoration has met with the approval of our regular customers and breathed new life into this wonderful Edinburgh institution.