The pub takes its name from The Blue Stane – a glacial rock made of dolomite – which now stands in the pub’s garden.

The stone has been standing in St Andrews since at least the sixteenth century and is treated as a good-luck talisman with the St Andrew’s pikemen touching it before departing for the Battle of Bannockburn. 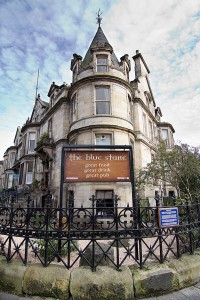 It forms part of the mythology of this historic city and is reputed to have been the coronation stone of King Kenneth McAlpine who united the kingdoms of the Scots and the Picts in AD843. Other legends say that it was a stone thrown from Drumcarrow by a giant towards the cell of St Rule and according to local folklore it is also a favourite place for the gathering of fairies.

The Blue Stane is a stylish, friendly bar that appeals to everyone from golf-playing tourists to local families, students and pensioners. Sports fans are kept occupied with six televisions and two Sky boxes showing all the major fixtures. Anyone can enjoy the good food on offer, try their skills on the pool table, and whisky drinkers can explore the 50 or so malts behind the bar. There are also DJs, live bands, open-mic nights and other events throughout the year.