The Bull Inn is one of the oldest pubs in Paisley.

It was designed by one of Paisley’s most famous architects, William D McLelland, who was a student of Charles Rennie Mackintosh and he designed many buildings in Paisley including this and St Matthew’s Church. Built in 1901, it still contains the very rare Art Nouveau decoration and style with listed status on internal features including the stained glass, bar and the snugs in the rear. Our pub was also used as a location in the 2008 film The Stone of Destiny.

‘designed by one of Paisley’s most famous architects, William D McLelland, who was a student of Charles Rennie Mackintosh’ 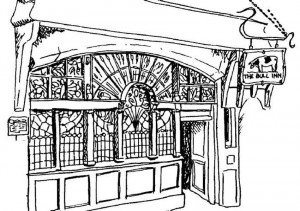 The Stone of Destiny is a block of sandstone, used in the coronation of Scottish Kings, and which was removed by King Edward I of England to Westminster Abbey in the thirteenth century. The film tells the true story of a group of students who plotted to seize the Stone of Destiny and who brought it back to Arbroath Abbey in Scotland and draped it in the Saltire, the Scottish flag.

The film stars Robert Carlyle, Billy Boyd and Kate Mara. Today the Stone of Destiny has been returned to Scotland and resides in Edinburgh Castle.