The Cock and Bull

A story of Food

The Cock and Bull began life as the Blairton Coaching Inn early in the nineteenth century and was then re-named The Coach and Horses before being bought by Rodger Morrison in 1995.

Mr Morrison had seen the growing popularity of food led pubs and was keen to open an establishment that could provide customers with an informal setting in which to enjoy good, honest food made from fresh local ingredients. 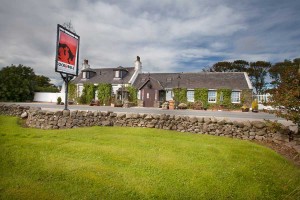 He then set about transforming this traditional watering hole into a gastro pub renamed The Cock and Bull. The aim was to build a unique and busy pub where the emphasis would not just be on the ales available but also on the robust food served, nothing too fussy sticking to the adage that ”simple food is good if it is made with the best locally sourced ingredients”.

The Cock and Bull has established itself as one of the most popular restaurants in the Aberdeen area as well as having a great reputation for nurturing young, local talent producing many Grampian Chef of The Year competition winners. The Cock and Bull has won Scotland’s best gastropub in both 2012 and 2013,is the proud recipient of an AA rosette and is the only North East pub to be recognised in the foodie bible that is the Michelin Guide.

The Cock and Bull