The Drum and Monkey

The Drum and Monkey is a beautiful pub which was built as a bank in 1924 by the eminent architect Andrew Balfour. 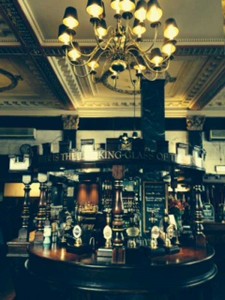 The style has been compared to classical American architecture of the time and it still retains an air of grandeur. The street it sits on is named St Vincent Street and like so many Glasgow street names, St Vincent Street marks a historical occasion. This name commemorates the sea battle of Cape St Vincent off the Spanish coast of Spain in 1797 – an early victory of the British over the French at the time of the Napoleonic Wars.

It is a great pub for real ales, winning CAMRA pub of the year 2011 and is a regular feature in the Good Beer Guide.

The Drum and Monkey