In 1964 the Beatles stayed at the Four Seasons Hotel on the banks of Loch Earn.

Late on a Monday evening in October, 1964, with rain dripping off floodlit trees, four travel weary tourists from Liverpool arrived at the Four Seasons Hotel. They were staying for two nights following a show in Edinburgh at the ABC Cinema and a show in Dundee the following evening. 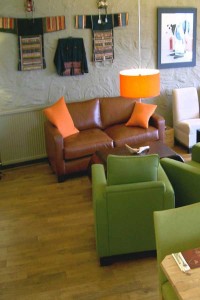 They slept long after sunrise and John and Paul, who shared a chalet, were out and about first. They took a short walk on the shores of Loch Earn and found the invigorating fresh air a bit chilly. George and Ringo, however, had breakfast in bed and although they were slow to appear in the morning, they were the last to go to bed on their return from Dundee. Police had to be called to disperse several car loads of teenagers and students who had followed the group back from Dundee on the Tuesday night and later that evening a party was held for the band by the manager of the hotel and his friends.

‘The Beatles loved this part of the countryside and found the peace and quiet of St. Fillans a pleasant change.’

On Wednesday morning the only Beatle to appear in public was Paul McCartney. The other three preferred the peaceful seclusion of their chalets to the quite bustle of the dining room. The handful of fans who had gathered hoping to have autograph books signed were disappointed when the Beatles’ limousine collected the famous four from their chalet and drove straight off to Glasgow. The Beatles loved this part of the countryside and found the peace and quiet of St. Fillans a pleasant change. Paul wistfully wished he had a cottage there but realised it was out of the question.

The original image which went with the local press coverage was titled “Cool Man! Cool!” and captioned “Paul and John find the fresh air at Loch Earn rather chillier than the reception.” Today you are welcome to stay in our famous Chalets 1 and 6.