The Globe Inn was established in 1610 and became the favourite haunt of our Scottish national poet, Robert Burns (1759-1796) during the eight years he spent in Dumfriesshire from 1788–1796, where unfortunately he died at the young age of 37. 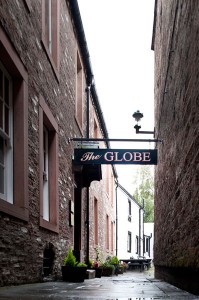 During his part time work as an Excise Officer in Dumfries he spent many an evening in the company of his friends in the back room of the Globe enjoying a few glasses of claret and ti’penny ale, whilst discussing the various permutations of his songs and poems and the politics of the day! On these occasions the volume of work required him to stay in Dumfries for several days and he therefore lodged at the Globe during that period.

In the upstairs bedroom he spent many an evening writing up his ledger of the day’s tax collections and he also inscribed six different verses on the window panes with a diamond tipped stylus, all of which can still be seen in that same bedroom today. During these occasions he had a fleeting affair with Anna Park, the niece of Mrs Hyslop, who was the Landlady. The room and chair which Burns used are still in use today and if you dare to sit in his chair you must recite at least one line of Burns. The penalty for failure – you must buy all the customers in the bar a drink!

In the 1930s an upstairs hidden room was discovered after a discrepancy in the window cleaner’s bill showed that there were more windows than rooms! After much searching the hidden room was found but the reason for it being hidden is still a mystery – was it to allow a previous owner to provide access by a back stair into the premises outwith licensing hours or was it to contain one of our many ghosts?! Many things happen within the Globe Inn which we fail to understand including a young ghostly lady who walks our stairs dressed in a long calico dress. As the building is over 400 years old and has always purveyed food and drink during that time it’s perhaps not a surprise many spirits, including Burns and his cronies, enjoy returning in many guises.