In 1784 Robert Wingate, a Stirling business man, commissioned the famous Scottish architect Gideon Gray to build a hotel on a site in Quality Street, Stirling which was later renamed King Street in honour of King George IV. 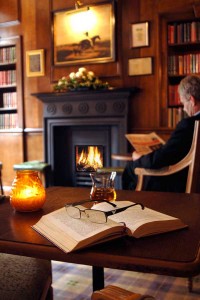 The hotel known as Wingate’s Inn opened to much ’fanfare and anticipation’ in 1786 and provided services for travellers journeying north to Perth and south to Glasgow. In 1787 the famous Scottish poet Robert Burns, then aged 28, and his travelling companion Willie Nicol, a Master at Edinburgh High School, visited Stirling Castle and stayed at The Golden Lion. At the time the Castle was in a very rundown condition and this inspired him to write the famous Stirling Lines which he etched on the glass of his room window and which summed up his opinion of the ruined castle from where the Stuart kings had once ruled Scotland. Regretting his actions he returned to Stirling later that year and smashed the window pane which contained the verse. The glass is long gone but we believe the original room is where the Library Bar is today.

Outside the Golden Lion in King Street you will find a marker which shows the position of the ‘New’ Port Gate which at one time was a causeway. The legend says that the growl of a wolf alerted a sentinel at the Town’s Port Gate around the year 900 and saved Stirling from being ransacked from an invading force of Vikings. For nearly two centuries our Golden Lion Statue, of which we are very proud, has looked down on the “New” Port Gate and King Street, acting as a symbol of protection, strength and confidence and has presided over many changes in our City. However one thing remains constant, the provision of our valuable services to travellers arriving in Stirling.