The Horse Shoe Bar was established in 1884 by Cavalry Captain John Scouller and was soon recognised as the premier example of a `Victorian Gin Palace` and it has changed very little in the 120 years since.

In the early 1900s it was taken over by John Young Whyte who made the major change of extending the bar which was then recognised as being `The Longest Continuous Bar` in the UK, at 104 feet 3 inches, and has held its place in The Guinness Book of Records ever since. 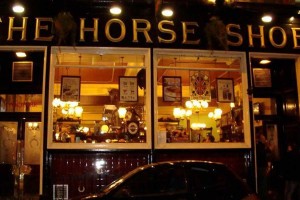 When the famous Roy Rogers and his horse Trigger visited Glasgow in the 1950s it was claimed that they rode right around the bar and the pub continues to attract many famous names including The All Blacks, Sam Torrance, actor Oliver Reid, comedian Billy Connolly and bands like Del Amitri and Deacon Blue.

The upstairs Lounge Bar started off as a low key cabaret where you could see the likes of Hector Nicol and Frank Carson and even Frankie Miller. Today it has evolved into the Karaoke Mecca of Scotland attracting visitors such as Atomic Kitten and has become a breeding ground for singing talent, producing many Grand Finalists for the Stars In Their Eyes television show. Michelle McManus, who was a regular singer, went on to win Pop Idol. In recognition of the above achievements, the outside wall of The Horse Shoe is adorned with brass plaques for these singers including Gary Mullen who won Stars In Their Eyes and many other finalists. One plaque that takes pride of place is from a local band called Travis who honed their skills in The Horse Shoe for three years and went on to super stardom. Yet the lads didn’t forget us and presented the pub with a Gold disc for their album The Man Who… as well as their Q Award 1999 for Best Song (Why Does It Always Rain On Me) and their Brit Award 2000 for Best Band, which are all prominently placed behind the bar for all to see.