The Maltman is a traditional bar set in the heart of Glasgow.

It is situated in between the two major railway stations and major shopping areas, so can be easily accessed for a quick pint or hearty meal. The pub has a long established reputation as one of Glasgow’s finest venues and is housed on the ground floor of Castle Chambers, a magnificent red sandstone building which is a symbol of Victorian prosperity. 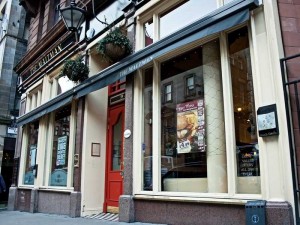 The bar itself is housed in a grand Victorian room with period fixtures and an impressive, brass-railed bar, A fire in 1981 nearly brought an end to the pub but thanks to a loving restoration job it has held onto the charm and character that makes it such a Glasgow institution. The name Maltman means a brewer, which is a craft which goes back to prehistoric times in Scotland. By the seventeenth century maltmen or brewers were well established in every town. Their craft symbol of malt shovels and sheaves of corn can still be found on gravestones all over the country.

The name Maltman means a brewer, which is a craft which goes back to prehistoric times in Scotland

Open 7 days the pub serves a full range of freshly prepared pub food, a great selection of drinks, including an extensive malt whisky range, and promises the best of service for all its customers. The Maltman gives a classy welcome at all times of the day, whether you’re in for a morning coffee or a weekend twirl on the dance floor. The pub offers large-screen Sky Sports as well as retro, chart and Motown sounds of DJ Tommy on Friday and Saturday.