The Mitre Bar is situated on the Royal Mile in the heart of Edinburgh between two iconic sites – Edinburgh Castle at the top of the hill and Holyrood House at the bottom of the hill. 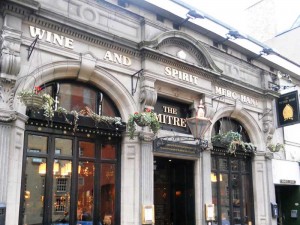 In 1615 the site of our tavern was occupied by a fine tenement that was owned by John Spottiswood (1565-1639), the then Bishop of St Andrews. He was a strict Presbyterian and was a Royal supporter when King James VI succeeded to the throne in 1603. He became Archbishop of Glasgow in 1610 and Archbishop of St Andrews in 1618 and went on to become Moderator of the Church. He continued in royal favour under King Charles I and was made Chancellor of Scotland in 1635.

However, he loyally supported the attempt to impose the King’s Book of Common Prayer in Scotland, though he thought the move mistaken, and following the riots in Edinburgh in 1637 he fled to Newcastle, fearing for his life. He was deposed in his absence on a series of spurious charges including adultery and sacrilege. He is buried in Westminster Abbey.

The tenement burned down in 1814 and was replaced by The Mitre Bar, a mitre being a Bishop’s headgear. Legend has it that the Bishop’s throne is buried under what is now the bar area and some say his spirit still walks the pub. Today excellent pub food is offered, together with a number of real ales.