Celebrating the Radical uprising of 1820, The Radical Road pub is a traditional lounge bar with a contemporary dining room. The pub takes its name from a road that was built around Arthur’s seat in Edinburgh following the uprising.

The Radical War of 1820, also known as the Scottish Insurrection, was the culmination of radical demands for reform in Britain which had arisen during the early years of the French Revolution, but had been repressed during the long Napoleonic Wars. An economic downturn after the wars ended brought increasing unrest and workers, particularly weavers in Scotland, sought action to reform an uncaring government. 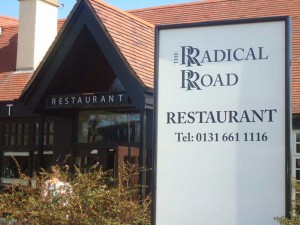 Following a call for a national strike, which began in Glasgow, all work stopped in central Scotland on Monday 3 April 1820 and events of disorder were organised. However, many people were arrested and several leaders were imprisoned, executed or sentenced to transportation. Thus the insurrection was crushed and following the visit of King George IV to Scotland in 1822, loyalist sentiment was boosted and Scottish national identity was reinvigorated. At the suggestion of the author Sir Walter Scott, unemployed weavers from the West of Scotland were then put to work on paving a track round Salisbury Crags in Holyrood Park adjoining Arthur’s Seat.

Today the path is still known as The Radical Road. The original artworks you will find within the pub (including the only known painting depicting the building of the road) echo the history of this site. De Moray and William Wallace’s army camped here on the site in 1297, Bonnie Prince Charlie’s army camped here prior to the Battle of Prestonpans in the Jacobite uprising of 1745, and we now have our own Tartan Army in residence.

We have many famous faces who use our pub, including Ronnie Brown of The Corries and Charlie Reid of The Proclaimers, as well as a resident poet who wrote for the First Minister. We also offer live music most weekends.