A story of Literature

There are two stories regarding the naming of The Rhoderick Dhu…

One is that the pub is named after a former Glasgow whisky distillery and the other is that it is named after Rhoderick Dhu, a character from Walter Scott’s famous poem The Lady of The Lake which was published in 1810. 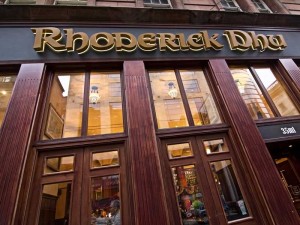 In the poem Rhoderick Dhu, chief of the Clan Alpine, was a ‘Robin Hood’ type character who stole from the rich landowners and was chased up onto the glens by the English Redcoats. There is a mural in the pub depicting this Rhoderick Dhu. The word Dhu means black in Gaelic so you will be able to spot him in this mural by his black beard and moustache.

‘In the poem Rhoderick Dhu, chief of the Clan Alpine, was a ‘Robin Hood’ type character’

With its high ceiling, wood-panelled walls and horseshoe-shaped bar that juts into the room, The Rhoderick Dhu is a lively city-centre bar that takes its sport seriously. Switching from horseracing to football, including all the major tournaments, it hits the back of the net with a wide age range thanks to the three Sky boxes and 12 large screen televisions (including one 3D television). The pub is a favourite too with the office crowd at lunch time and early evenings and there is a mixed weekend bunch who enjoy the regular live music. It also has its own award winning built-in smoking courtyard to the rear complete with plasma television, heaters and fairy lights and this has recently won an award.