The Scotia Bar is reputed to be the oldest pub in Glasgow. Built in 1792 it played host to the merchant sailors bringing goods to Glasgow.

Latterly it has become the local haunt for Glasgow’s musicians, actors, poets and political groups. Enjoy live music four days a week or borrow the pub’s instruments and make your own tunes! 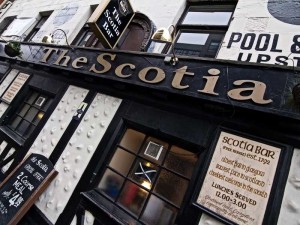 The staff hand-pick the live acts – primarily rock and blues – who appear at the far end of the bar from Thursday to Sunday. And, to ensure everyone gets a look, there’s a ‘band cam’ sending a live feed of the musicians to a television at the front. The standard is high: musicians visit from all over the world and it’s not uncommon to see performers of the calibre of Pentangle and Van Morrison’s band. Back in the day, Billy Connolly and Gerry Rafferty would perform here.

‘Back in the day, Billy Connolly and Gerry Rafferty would perform here’

Although music is the focus, The Scotia is a culturally minded place, also popular with poets and writers, including James Kelman and William Mcllvaney. Throughout the year the bar runs competitions not only for singer-songwriters but also for short-story writers and performance poets aiming to be crowned the Scotia Poet Laureate. There’s a writers’ meeting on the second Monday of each month. Traditional ‘pub grub’ is served 12-5pm daily. With over 200 years of hospitality to its name, it’s a bar that understands its customers perfectly.