We are a city centre bar that has been on its current site since 1902. It is said that American secret services passed on intelligence here, nowadays the only secret we have is for Kay’s steak pie recipe.

We have a strong afternoon trade for our traditional pub fayre, which has a hale and hearty reputation. We also have a continually changing selection of cask ales from all over the UK, for which we have been lucky enough to win the local CAMRA award twice in recent years. 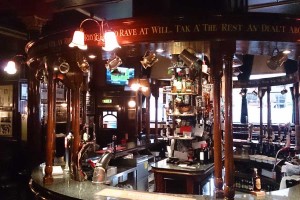 As well as great ales we have a broad selection of whiskies and at any one time we have fifty malt whiskies available.

We are just as committed to entertainment as we are to our ale, whisky and food. Our blues jam session has been playing every Tuesday for the last eighteen years and we also host the longest running comedy club in Glasgow. For the last sixteen years, every Saturday night, we play host to comedians from around the country. Previous acts have included Frankie Boyle, Kevin Bridges, Jerry Sadowitz and Rory Bremner. On the first Friday of every month we play host to the Vagabond social club, an acoustic night with a slant towards Americana which has acts from all over the world.