The name Tappit Hen translates as ‘topped hen’ and comes from a seventeenth century Scottish pewter drinking jug with a lid topped with a topknot, like a crested hen.

Facing the picturesque Dunblane Cathedral, this is a bar steeped in tradition which evokes the atmosphere of the early seventeenth century, The Tappit Hen is as traditional as they come. 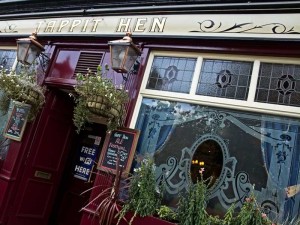 It’s a friendly one-room pub, with the room split up by wooden dividers, that attracts a true cross-section of locals, plus tourists, who are attracted to its great range of real ales and malt whiskies served from the old-fashioned wooden bar.

It’s not all history though. This is an award-winning pub that prides itself on its atmosphere and hospitality and the walls are lined with the insignia of beers served over the years. Real Ale festivals are also held here a couple of times a year and there is also a weekly folk music night every Tuesday. The locals regularly get together to raise money for charity, demonstrating just what a hospitable and generous place it is. The Tappit Hen also hosts frequent karaoke nights and other contemporary music evenings.