Its slogan is “the pub for fun, food and music” and there’s plenty of all three to be had in this welcoming city-centre bar which has been entertaining Perth since 1975.

You enter past the all-weather beer garden past a bright conservatory before reaching the low-ceilinged central room with its long, wood-panelled bar. Beyond that is the music room, which acts as a fringe venue for events such as the Southern Fried Festival, the Beladrum Festival, Perth Music Festival and Doune the Rabbit Hole. 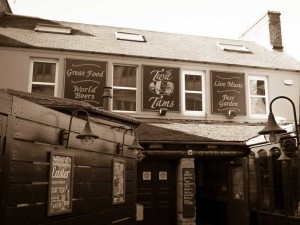 Belle and Sebastian, Travis, Frightened Rabbit and K T Tunstall are among the many bands to have played here and our venue is the cornerstone of the Perth music scene. There are gigs two or three nights a week and an open-mic session on Sunday afternoons. The four television screens show a feed of the bands, so no-one misses out and, better still, the music is free.

‘Belle and Sebastian, Travis, Frightened Rabbit and K T Tunstall are among the many bands to have played here’

The Twa Tams is a friendly and spacious pub and a great place for a drink and a meal. Thanks to an all-weather beer garden and a mouth-watering menu, it’s also a hit with pensioners, families and everyone in between.