The earliest written records for The White Hart Inn on this site date to 1516. However, only the cellarage survives from this time, whilst the building above ground dates to 1740.

The pub gets its name from a miraculous and holy event that took place in Edinburgh in 1128. The Scottish King David I, against the advice of his priest, set out hunting upon the Feast Day of the Holy Rood, which is Scots for the Holy Cross. 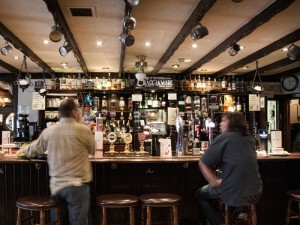 He came upon a huge, white stag and gave chase but was suddenly thrown from his horse. The maddened stag immediately turned upon its pursuer and King David began frantically praying to God for his salvation. The story is told that a fiery cross appeared between the stag’s antlers before it vanished from sight. A grateful King David built a shrine upon the site of the miracle, founding Holyrood Abbey, the ruin of which may be seen today at the rear of Holyrood Palace.

‘Two of the most infamous patrons were Edinburgh’s notorious bodysnatchers, William Burke and William Hare’

For many years public executions were held a few hundred steps to the east and the crowds would keep the innkeeper extremely busy. The White Hart Inn has also welcomed many notable patrons throughout its five centuries including the Scottish bard Robert Burns, who spent one week here in November 1791 visiting his lover Nancy Macklehose (Clarinda) for one last time and during his stay he was inspired to write one of his most beautiful and enduring love songs, Ae Fond Kiss. Some of his poetry may be seen painted upon our wooden rafters. Two of the most infamous patrons were Edinburgh’s notorious bodysnatchers, William Burke and William Hare, who spent the year of 1828 enticing several of their fellow patrons back to their nearby lodgings only to murder them and sell their corpses to Dr Knox at Edinburgh Medical School. Their faces may still be seen grinning from their places on The White Hart’s beams. In recent years, staff and customers have reported numerous sightings and experiences that suggest the hospitality offered at The White Hart Inn over the centuries has been so good that some of our patrons have decided never to leave!