King David I of Scotland founded a monastery at Holyrood in 1128 and the road followed by the Canons as they moved between the monastery and the walls of Edinburgh further up the hill became the Canons’ Way or Canons’ Gait.

For many centuries the area known as Canongate remained a separate burgh, outside Edinburgh’s city walls. This made it a much more spacious and desirable place to live for the great and the good of the city, though at times it could also make it a dangerous place to live. 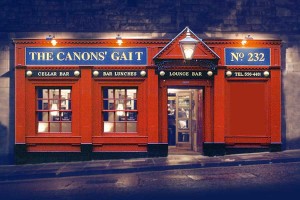 The area was sacked repeatedly, most comprehensively by Richard II in 1380.

The building housing the pub is located on the site of Plainstanes Close, so called because it was paved like Canongate itself. In the 1500s Mary Queen of Scots’ French tailor Jaques de Soulis lived here. Today The Canons’ Gait offers food all day, with a wide selection of imported lagers and traditional real ales and our cellar bar is a very popular venue particularly during the Edinburgh Festival with a full house most nights.