There’s been a pub on this site since 1860 but it is more recent history which brings The Arlington Bar its fame.

The Arlington Bar in Woodlands Road in Glasgow believes it is the home of the real Stone of Destiny which sits proudly in the bar. 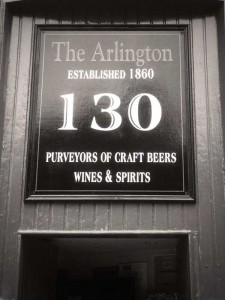 The Stone of Destiny was a carved seat used for the coronation of Scottish kings and queens until it was stolen by the English King Edward I and taken to Westminster Abbey in 1296. On Christmas Day in 1950, four patriotic Glasgow University students stole the Stone of Destiny from Westminster Abbey. When they returned to Glasgow, they went to the Arlington Bar for a celebratory pint and hoisted the stone onto the bar top. Most people believe the stone was returned to Westminster in 1951 and is now on display in Edinburgh Castle, but the pub owners believe otherwise. They claim that the students made a replica of the stone which they passed off as the original, and the real Stone of Destiny was hidden in the Arlington Bar beneath a boxed pub seat.

Today the stone sits in an open wall niche with colour-changing lights and you are even allowed to touch it. A short movie is scheduled to be made in January 2014 featuring the story of the stone.