A story of Film / TVSport

The Clachan Bar recently underwent a complete facelift and is Scotland’s only water-skiing theme based bar, staged around the rich water sports heritage on Lochearn itself, only yards away.

Just after the Second World War an American was given the task of promoting water-skiing in the UK and visited the loch sites around Scotland where access could be easy and the water suitable. 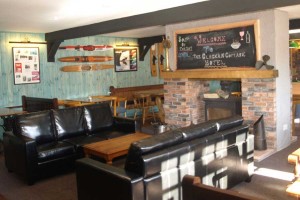 Mr Ewan Cameron, the hotel owner, was given a demonstration of water-skiing however he was a big laddie and the boat was not powerful enough to pull him out the water! Another boat had to be brought up to the Loch and together the two boats managed to pull him up out the water and from that point onwards the hotel and the Loch was forever associated with water sports, especially water-skiing.

‘…he was a big laddie and the boat was not powerful enough to pull him out the water!’

The bar sits nestling on the shores of Lochearnhead and as such attracts a huge amount of overseas tourists who love the views out of the windows towards Edinample Castle. We have been visited by several film stars who seem to enjoy the peace and quiet including Gerard Butler and Ewan McGregor. There is no finer spot to sit back with a pint of real ale.